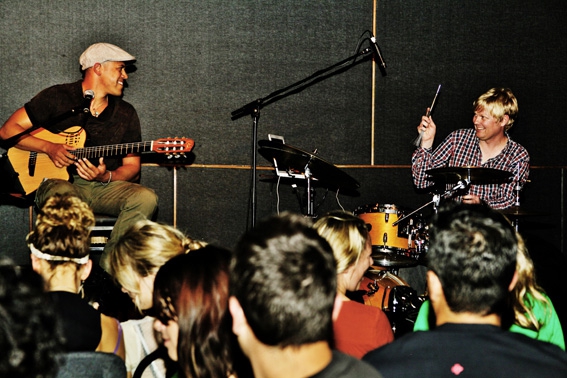 These guys play samba, the rhythms of North East Brazil, Sting, Bob Marley and everything in between. Blending electronic sounds with acoustic vibrancy, these two have a natural chemistry that is infectious.

Marcio Mendes – Marcio hails from Sau Paulo, Brazil’s largest city. He has played music professionally since his early 20’s and has performed with highly respected names of the Brazilian music scene such as Djavan and iconic samba and pagode bands from Brazil such as Mundo do Samba, Arte Popular and Negritude Junior. He has entertained crowds as large as a hundred thousand people in Brazil, Europe and Australia with the artists Leandro Learte and the pianist Tania Maria.

Contemporary Artists:
Sting – Fragile, Every Breath you take, Fields of Gold
Bob Marley – Wait in Vain, Stir it up, No Woman No Cry, Is this Love, Jammin
Stevie Wonder – Superstition, Higher Ground, I Wish, Master Blaster
Bill Withers – Aint No Sunshine, Use Me

There are currently no gigs scheduled for Duo Sao Paulo.