Born from Arthur King front man Matt Burke’s inability to shed the spotlight during the COVID-19 lockdowns of 2020, Laughter King is the live stage show version of Matt’s Covid Quarmedy – a series of live streams featuring musical comedy songs to put smiles on dials, laughter cramps in tummies, and hands over children’s ears.

As featured in The West Australian newspaper, Laughter King features music from the dreaded musical comedy genre’s acts such as Flight of the Conchords, Tripod, Tim Minchin, Weird Al Yankovich, Tenacious D and more, presented by Matt Burke, who has been described (in a reasonably poorly lit room) by comedian Akmal Saleh as a “a young Brad Pitt”.If you need some light-hearted entertainment for your next function or event, this is the show for you.

(Not suitable for children residing outside of the City of Armadale.)“You can’t sing that!” – Matt’s girlfriend

“Want to go outside and punch on?” – A very upset man who had never seen a loop pedal, at a Suburban bar 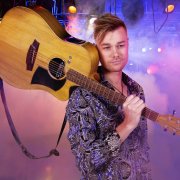 Business Time – Flight of the Conchords

Carol Brown – Flight of the Conchords

Do it with Madonna – The Androids

Much Too Skinny for the Army – Tripod

The Eulogy Song – The Chasers War on Everything

There are currently no gigs scheduled for Laughter King.