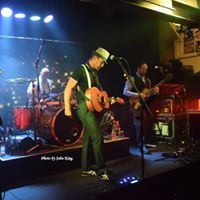 PINSTRIPE are a popular four piece cover band, unleashing the biggest hits from the Top 40 and Triple J. PINSTRIPE formed in 2012, with the four members having all moved from different parts of the country. They are an experienced group of musicians from a variety of backgrounds, from professional corporate bands to supporting some of Australia’s top bands.

PINSTRIPE has performed regular gigs at Divers Tavern and The Roey in Broome, as well as appearing at the biggest events in Derby and ‘rocking the bridge’ at the Willare Rock Festival. In 2013, PINSTRIPE supported Indie-pop sensations ‘San Cisco’ at the Divers Beach Bar in Broome and Aria award winners ‘1927’ at the Spinifex Hotel anniversary concert in Derby.
After touring WA in 2015 to great response. Pinstripe are now based in Albany and have added a new dimension to the Great Southern music scene. Big crowds,sing along anthems and plenty of high energy chart toppers are what PINSTRIPE are what PINSTRIPE bring to the party.

Now performing all over the Great Southern and beyond,PINSTRIPE is guaranteed to get the dance floor pumping.

There are currently no gigs scheduled for PINSTRIPE.