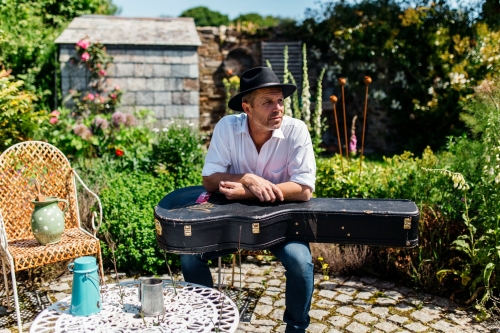 At this special home town gig, he will launch the album with a two set show accompanied by the wonderful Lucy Fisher on violin and local gem Helen Townsend will open.

A genuine troubadour, Thompson is one of Australia’s hardest working musicians, touring the world as an independent artist with family in tow, whilst building a loyal fan base over six studio and two live albums. And with 2017’s Island, the critical plaudits flowed – a WAM Song of the Year, a finalist in the International Songwriting Competition, and high rotation on Double J.

For the recording of Shakespeare Avenue, Thompson moved his family to the South-West of England, to immerse himself in folk traditions and to write and record with a new approach. His narrative, character based emotive songs have long earned him comparisons to Springsteen and Mellencamp, however this time there is also a distinct Richard Thompson, Christy Moore, Dick Gaughan, Anglo-Cetlic Edge.

Part of the lure of England was Thompson’s connection to Folk star Seth Lakeman (who has spent the last two years touring the world with Robert Plant) and his Mercury nominated producer brother Sean Lakeman. These two, alongside Sean’s partner Kathryn Roberts are a “virtual folk dynasty” – highly respected on the international folk scene.

Sean produced Shakespeare Avenue, and the entire trio feature on the record – lending their considerable musicianship and heavyweight folk expertise. The connection with them, together with the move to England has paid dividends, resulting in Thompson’s most artistically direct to date.

A renowned live performer, Thompson will deliver these new songs as well as old over a special two set show, all with the energy and passion that has made him one of Australia’s favourite acoustic artists.